History of Catholic Education in Manitoba 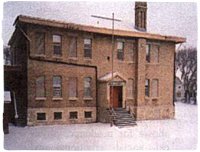 For decades prior to Manitoba's becoming a province in 1870, education was provided by religious denominations both Catholic and Protestant.  Funding for the schools was provided by a combination of tuition fees and grants from the Council of Assiniboia, the Hudson's Bay Company and the supporting churches.

In 1870, when the Manitoba Act was drafted, a number of safeguards were incorporated into the act to protect denominational schools and language rights.

While Section 22 of the act gave the provincial legislature authority to make laws in relation to education, this authority did not extend to rights or privileges with respect to denominational schools held by certain classes of persons at the time of union.  These rights could not be prejudicially affected by actions of the province; in fact, an appeal for remediation of such action could be directed to the federal government.

One of the first statutes passed by the Manitoba legislature in 1871 was an Education Act, which continued the arrangement that existed prior to 1870 and provided for Catholic denominational schools supported by Catholic taxpayers and Protestant denominational schools supported by Protestant taxpayers with provincial grants shared proportionally by the schools.

In 1871, the population of Manitoba was approximately 11, 000 about equally divided between French-Catholic and English-Protestant Manitobans.  Over the next 20 years, there was a dramatic increase in population to 152, 000 only 15% of which was Roman Catholic.

Not surprisingly, the Catholic community sought redress in the courts for the breach of their historic rights and the rights provided under Section 22 of the Manitoba Act.

The case proceeded through various levels of court and appeals with the Catholic position being favoured by the Supreme Court of Canada.  However, the issue was referred to the Privy Council in Britain which supported the province's right to pass the act that removed provisions for the denominational schools.

This petition was referred by the federal government to the Supreme Court for advice and direction and from there to the Privy Council in London.

The Lord Chancellor of the Privy Council, Lord Hershell, stated the position clearly.  Prior to the acts in question, Roman Catholics controlled and managed their own schools.  With the act, Roman Catholic schools received no aid from the state, yet these citizens were liable to local assessments for public schools they did not deem appropriate for their children.

In 1895, the federal government passed a remedial order directing the province to restore to Manitoba Catholics the rights and privileges in relation to education they enjoyed prior to 1890.  The provincial government refused to do so.

The federal government then introduced a bill in the Parliament of Canada under Section 22(3) of the Manitoba Act to restore to Manitoba Catholics the education rights they had enjoyed prior to 1890.  The bill did not receive a third reading before Parliament was dissolved for a general election and it was never reintroduced.

The compromise did not allow Catholic schools to share in public funds as they had before and did not relieve Catholics of the obligation to support the new public schools.

After 1890, a system of schools owned by religious orders and parochial schools staffed by religious orders developed.  These schools relied on the financial support of parishes and tuitions from parents in order to be constructed and operated.  The development of Catholic schools was encouraged by the Archbishop of Saint Boniface and after 1915, the Archbishops of Winnipeg.

Lay teachers were gradually hired starting in the 1950's as the schools rapidly expanded during the baby boom era.

In 1959, the McPharlene Royal Commission recommended grants to parochial schools of viable size at 80% of the public schools grant level, but this was not introduced.  In 1965, provision was made for private (independent) schools to get some help; textbook purchases, transportation and access to shops and home economics programs in public schools, where the public school board would co-operate.

In 1974, the Catholic community, in concert with the Jewish and Mennonite communities and other denominations concerned with independent education formed the Manitoba Federation of Independent Schools (MFIS).  MFIS began to request the government of the day provide fair financial assistance for Manitoba students attending Catholic and other independent schools.

An attempt was made in 1985 to speed up that progress towards fairer funding.  The Manitoba Catholic School Trustees' Association in conjunction with the Catholic Bishops and Catholic Schools and with the agreement of non-Catholic members of MFIS, petitioned the federal government for fair funding for all students attending independent schools.  While this was a new position rather than a mere restoration of 1890 Catholic school rights, it was pointed out that this so-called fair funding did not satisfy the claims of the Catholic community under Section 22.

The possibility of a Supreme Court ruling stirred reaction in Manitoba's main political parties.  Of particular interest was the Supreme Court ruling of 1985 concerning Section 23 right of the French community.  The similarity in fact and principle between French language rights and Catholic denominational rights was very clear.  Reference could also be made to Supreme Court comments on such denominational rights under Section 93 of the BNA Act, which are substantially the same as Section 22 of the Manitoba Act.

The Remedial Order Petition was a Catholic initiative but was the catalyst that authorized MFIS to negotiate with the Province of Manitoba a fair funding agreement to benefit students in Catholic and other independent schools in Manitoba.

By letter dated June 12, 1990, the Department of Education and Training (Manitoba) agreed to increase grants to qualified independent schools to a maximum of 80% of the operating grant provided by the Department to public schools.  The grant would be 55.5% in the school year 1990-91 and increase at stated increments to school year 1998/99 when the grant would be 80% of the operating grant provided to public schools.

In addition to the basic grant:

The funding provisions of the agreement were commenced, but in 1993 the Department of Education and Training, because of serious general economic problems, advised it was necessary to freeze the increments provided by the agreement and no increase in the rate of funding was made in the years 1993/94 and 1994/95.

The negotiations and discussions between MFIS and the Department of Education and Training (Manitoba) led to a revised funding agreement set forth in a letter dated January 2, 1996 from the Department to MFIS.  This agreement had the effect of bringing the level of funding to the approximate amount it would have been had the 1990 fair funding agreement been implemented.

With a stable funding agreement, the number of parochial and religious order schools stabilized.  Many schools had closed in the 1970's for financial reasons.  The student population has continued to increase throughout the 2000's and now stands at over 5000 students in the 18 schools that remain in the province.  The first new Catholic school, Gonzaga Middle School , opened in September 2016 bringing the total to 19 schools.

Three schools are owned by religious orders; St. Mary's Academy (Sisters of the Holy Names of Jesus & Mary), St. Paul's High School (Jesuit), and Immaculate Heart of Mary School (Sister Servants of Mary Immaculate) while Gonzaga Middle School is associated with the Jesuits.  St. Boniface Diocesan High School is owned by the Archdiocese.  There are 14 parochial schools that are owned by parishes.  Each school is incorporated separately and has a Board of Directors.

St. Augustine School in Brandon is the only Catholic school outside the City of Winnipeg.  It is not an independent school and does not charge tuition as the staff are employees of the Brandon School Division (Public) through a special agreement that was negotiated in 1967.

Catholic schools have a long history in the Province of Manitoba.  They have survived and flourished through the sacrifice and dedication of religious orders, bishops, pastors, parishes, and parents who built and continue to operate them.  The Catholic community in Manitoba had their rights trampled with the Public Schools Act of 1890 that appropriated our school system and ended our constitutional rights for fully funded denominational schools.  That right still exists in the Manitoba Act which is an act of the Parliament of Canada that is defined by the Constitution Act of 1982 as forming part of the Constitution of Canada.  These constitutional rights are not being pursued because of the Fair Funding agreements of the 1990's.  Our present Catholic school system continues to grow as parents want their children to be educated in an environment that nurtures the faith, values, traditions and beliefs of the Catholic Church.